The Marriage of Bette & Boo 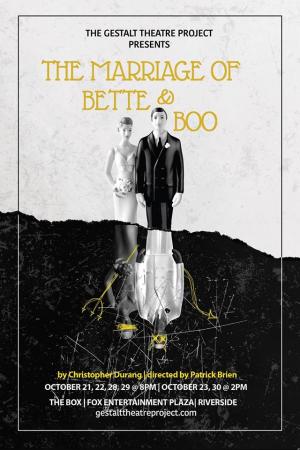 Christopher Durang comedies like "Sister Mary Ignatius Explains It All For You" have been charming audiences for years and his success only continued with his 2013 Tony win for "Vanya and Sonia and Masha and Spike." Now, The Gestalt Theatre Project stages one of his earlier, and much darker, works. The winner of several Obie Awards in 1985, this painfully funny absurdist comedy takes a once-hopeful couple through twenty years of married life, with all of its conflicts, disappointments and tragedies, as told through the eyes of their only son. Produced by the same company that brought us such acclaimed productions as "The Pillowman" and "The Last Days of Judas Iscariot."

The Box is used by community and professional theater groups. Through The Box website you are able to link directly to websites of those organizations which rent The Box for performances. The City of Riverside does not control the nature, content and availability of those sites. Community and professional theater groups are responsible for tickets sales for their performances. In the event you have complications reaching the theater group, call (951) 347-6572.